This thread is just for fun. I'm sure Matt's having a tough enough time deciding whether or not he's going to make a sequel, but he did say that IF HE DID, he doesn't want it to look exactly the same, which means except for the black and white look with colored objects and the deep, shifting shadows, the Edward Gorey look is so Neverending Nightmares 1 (maybe). With that in mind, what art styles or works from a specific artist do you think would work?

Personally, I think the wishey-washey, half-insane scrawlings of Norwegian expressionist painter Edvard Munch would be a perfect match. It's unique, and I think it would still look good when animated and in motion. Best known for The Scream, here's a small sample of his creepier, more monochromatic pictures: All this and more can be found here: http://www.wikiart.org/en/edvard-munch#close

I think if the "creeping shadow" particle system got tweaked a little so it looked more scratchy and shifty, it could totally work.
Top

Those are pretty awesome. They seem really challenging to replicate though. Still, they are very good reference, and something we'll consider.

Thanks for the suggestion!
-Matt Gilgenbach
Lead Frightener at Infinitap Games
Top

Ohhhh yeah I like that artstyle for sure, but I can imagine it'd be hard to replicate in terms of actually putting it into a game interaction scenario. Still if you pulled it off it'd be mighty impressive!
"Always look on the bright side of life"
Check me out on Steam if you like! - http://steamcommunity.com/id/JPrice321/
Top

Alright, I guess I can keep going.

Something a bit closer to Neverending Nightmares 1's art syle would be the completely and quite literally insane scrawlings of Spanish artist Francisco Goya, probably most famous for Saturn Devouring His Son, which lovingly adorns the cover of The Philosophy of Horror by Noël Carroll. When he was in his 20s, he fell extremely ill to an unknown illness which slowly deafened him and drove him insane. There are theories ranging from poisoning from the lead paint he used to viral encephalitis, but ultimately he never talked about it with anyone so we'll never know. He started getting more and more strange and withdrawn, until he locked himself inside his house and painted a bunch of extremely dark and disturbing pictures all over his walls, one of which was Saturn Devouring His Son. I would probably have a heart attack if I was walking through an insane artist's hovel, stepped into his bedroom, and was greeted by this fucking thing on the wall: 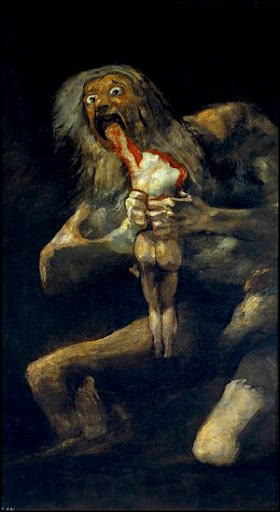 And keep in mind that it being about Cronos eating the gods is just what we think it's about. He never offered a title, context, or explanation for any of those paintings.

Anyways, even though his creepiest stuff is arguably in his paintings, he still managed to do some etching and lithography as well: 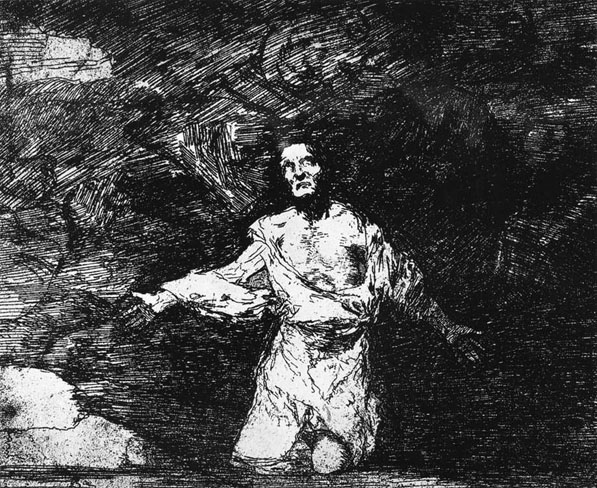 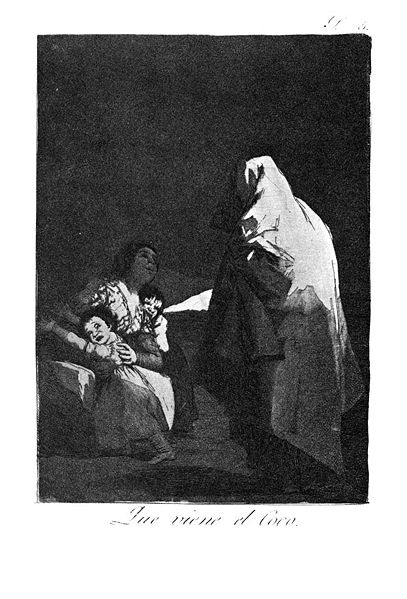 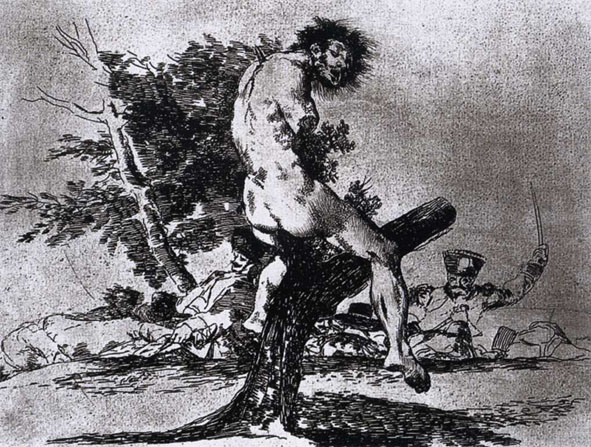 And yes, that was a naked man with his arms cut off impaled on a tree branch. All this and more and be found here: http://www.wikiart.org/en/francisco-goya#close
Top

Wow cool! Those are really good. It seems like a difficult style to pull off, but I'll show it to the artists and maybe we can do some tests when we get to that point.

Awesome! I know you want to have something relatively simple so your artists can produce art assets at a decent clip, but I figured I'd share anyway. I've always been fascinated by how art seems to attract mental illness like moths to a flame, and especially when mentally ill artists are able to share some of their experience in their work. Rene Magritte, for example, was as healthy and sane as a surrealist painter could be, but when he was young, his mother was succumbing to mental illness and was suicidal. His father locked her in her room, but one day she escaped out the window and drowned herself in a river. He was there when they pulled her body from the river, and her dress was draped across her face. So even though he was by all accounts normal, the fact that people with cloth obscuring their faces became a recurring image in his artwork gives us a little glimpse at his actual mental state:

I'm sure your artists have ideas as well, of course, and I've always been meaning to ask - how did they come up with the paintings in Neverending Nightmares, exactly? Did you give them the concepts? Did they draft a bunch of them up and let you pick and choose? Did you give them guidelines and let them do whatever they wanted? I'd be interested to know what their artistic influences were.
Top

For the paintings on the walls? Sometimes I would give them ideas but more often than not, they'd pitch a bunch concepts, and I'd choose what I liked. I'm not sure where they got their ideas. I would have to ask them!
-Matt Gilgenbach
Lead Frightener at Infinitap Games
Top

Wow. I swear I didn't see your thread before posting The Scream picture in the other forum as a recommended art style. I guess we have a few Munch fans around here.

He is an amazing artist, and we did try to model the faces in the wood grain of the floor off the scream.

One artist I truly love that has a strange, beautiful yet strangely disturbing style of Aubrey Beardsley. I would suggest looking it up and checking out a bunch of different pictures. My mother was a fan so I got to see a few old artbooks of the world as a kid and I am sure some of it fueled my nightmares.

A lot of his work are illustrations for some very twisted old stories, and it is a fairly simple line art style that would feel vaguely familiar for those that liked NeN's style but at the same time isn't too overcomplicated that the art team might feel overwhelmed or constricted.